Finishing Line Press is proud to announce the publication of 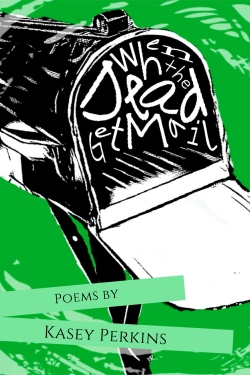 When the Dead Get Mail, a collection of poems, by Kasey Perkins

When the Dead Get Mail, a new collection of poems by Kasey Perkins, explores the past, evoking “images of suffering but does not dwell on regret. She presents somber events of a life from which she seeks to gracefully recover.” The book is a testament to pure, “raw energy,” according to reviewer and writer Christine Frederiksen, writing for The Green Hills Literary Lantern.

Joseph Benevento, author most recently of Expecting Songbirds: Selected Poems: 1983-2015, says that “It’s not that unusual to find a poetry chapbook trusting the reader will accept phrases in Latin, the Lotus Sutra or Eliot’s “The Wasteland,” among its educated reference points, but it is much rarer to find such allusions embedded in poems recounting an underprivileged, deeply anti-intellectual upbringing, or an adolescence complicated by a pregnant friend regretting her meth use, or a younger brother undone by his parents’ neglect. When the Dead Get Mail speaks with heartbreaking authenticity about such lives, though the power of Kasey Perkins’ lyricism never seeks out the reader’s pity. Rather than trying to ignore or exploit her difficult past, Perkins acknowledges it as an incorrigible older relative, a blood relation who can be eluded but never denied. Late in the collection there are happier times and topics, though even the simple building of a snowman delivers a metaphoric vision of Perkins’ path: “He has to have a strong/core before you/can wrap him in snow skin.” With honesty, with humor, with considerable poetic talent, Perkins’ When the Dead Get Mail never considers settling for survival, even as it shares with us its power to transcend.”

“Kasey Perkins is a collider of worlds: the imaginary with reality, compassion with pain, the dead with the living,” writes poet Shane Seely, The Surface of the Lit World, History Here Requires Balboa, and The Snowbound House. “These collisions result in new amalgams, new elements, new realities in which past and present, love and pain, real and unreal intermingle. These are poems of the yearning heart, poems of what is and what might be, poems that teach us how to cope in the face of loss and want and change. These poems invite us to see the world, and all that we need from it, again, anew.”

Kasey Perkins, is a teacher, freelance editor, and writer who completed her MFA in poetry from the University of Missouri – St. Louis in 2014. She is the recipient of the 2014 Margaret Leong Children’s Poetry Prize, was shortlisted for the Ruby Irene Poetry Chapbook Prize through Arcadia Magazine, and received her MA in English at Truman State University in Kirksville, MO. There she was both a frequent performer and organizer in the poetry slam community.